Have the Ultimate Spring Break in RI

Play All Day in Providence

Celebrate Spring in the East Bay

16 ways to be active, creative, and wild

1. Sip Your Way Back in Time
Once, the soda fountain was also a fountain of youth. On every Main Street, there was a pharmacy with a soda fountain attracting crowds of kids. Green Line Apothecary is modeled on that vintage vision. “Going to the pharmacy is everyone’s least favorite thing to do,” says Christina Procaccianti, owner and head pharmacist. “We are trying to do it a much more fun way.” The Wakefield location is a functional pharmacy, where you can order meds and flu shots. But unlike the local Walgreens, Green Line has the ice cream-topped soft drinks of yesteryear, and the pump-and-jerk taps are restored 1940s originals. Sweeter yet: Procaccianti concocted the sodas herself, and every shake and float is mixed with all-natural ingredients. The venue is a hit with her three daughters. “We do put them to work a little bit,” says Procaccianti with a laugh. “They have to earn their free ice cream.” Wakefield

2. Sing it Loud
Before they master the intricacies of key signatures and major scales, children like to sing songs and make noise. Offered by the Chorus of Westerly, the Music & Movement Program is designed to introduce kids four to six years old to the magic of instruments and dance. Once they’ve experimented with sound and rhythm, young singers can add their voices to Westerly’s acclaimed chorus. There’s an audition, but kids don’t have to be prodigies; the choir directors just want to assess their skill level. Westerly

3. Solve Mysterious Mysteries
You have 60 minutes to infiltrate the mob. Will you be the youngest detective ever to go undercover and get out alive? You have stiff competition: one RI Riddle Room upstart was seven years old. A cult phenomenon across the country, this fully interactive game requires a group of players to problem-solve their way out of a room. The Riddle Room in East Greenwich is designed for adults, but children under 18 can join with a waiver, and children under 14 can test their skills with adult supervision. East Greenwich

4. Get Hands-On With Art
No well-rounded childhood is complete without sculpting a vessel out of clay, coating it in glaze, and firing it up in the kiln. The Kids’ Pottery class is the perfect studio for learning basic ceramics, and children can learn at their own pace in a monthlong crash course. The Jamestown Art Center is packed with youth-oriented workshops, and some cater to kids as young as three. This bright and multifaceted facility offers instruction in everything from painting to digital photography, and some classes let entire families join in. Check out the April calendar for a series of specialized “vacation camps.” Jamestown 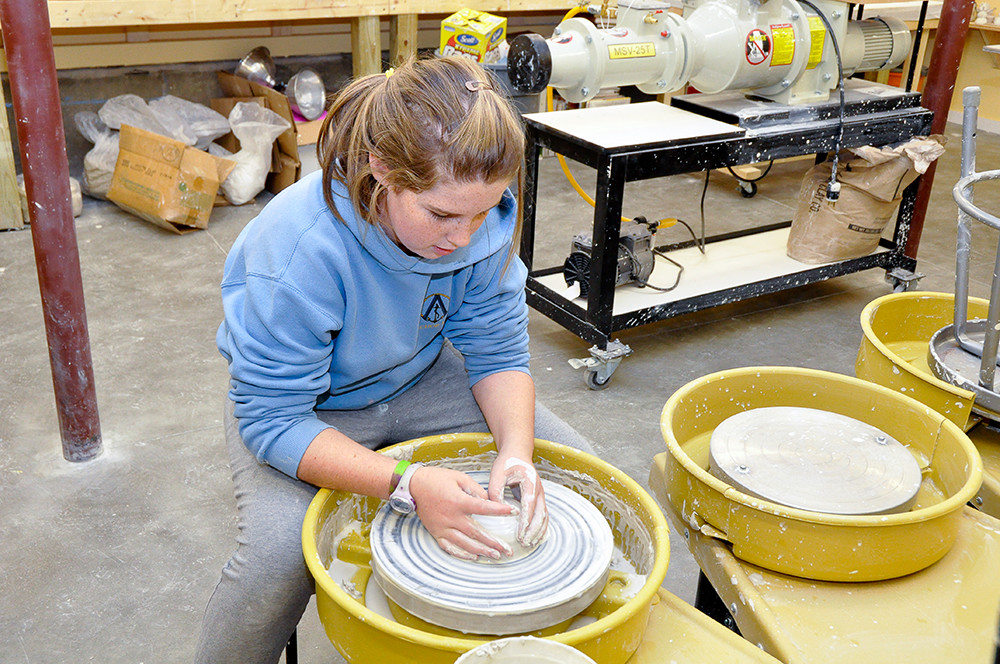 5. Find Your Inner Crafter
You don’t often get to do crafting with an expert in Lego robotics. But Lynn Murphy is no ordinary crafter: the East Greenwich-based artisan went to New England Tech for software engineering, and she later became a local TV personality with her program Time to Design. When she’s not sewing, quilting, or painting, Murphy is teaching area students how to build and program robots. Craftersnight started as a painting night during the Main Street Stroll, but Murphy’s events have become a touchstone of the East Greenwich arts scene. Murphy hosts crafty birthday parties and arts-oriented summer camps, plus individual lessons and events for adults. East Greenwich

6. Get Dramatic
When it comes to live theater, there are all kinds of things you can do onstage: comedy, drama, improvisation, even poetry. Your child can learn all these forms at Wakefield’s Contemporary Theatre Company. The company is best known for its adult productions, like the forthcoming Rosencrantz and Guildenstern Are Dead in April, but the organization also hosts a variety of after-school classes, including a Saturday morning drama club, a juggling workshop, and even a Shakespeare Summer Camp for grade schoolers. Wakefield

7. Shake Hands With Marine Life
Everybody loves seals, and the seal-watching tour is just one of the activities that has made Save the Bay such a beloved organization. The Newport headquarters are well trafficked, but science-minded kids will also enjoy the Save the Bay South Coast Center, where they can touch native marine life, hear stories, and use crafting materials to create their own undersea creatures. Westerly

8. Explore the Deep Blue Sea
Birthday parties are so much more fun when you get to pet a shark. This is one of the perks of Biomes, New England’s only private facility dedicated to marine education: you can rent the entire place and invite 20 young partygoers. If your child has an affection for mollusks and crustaceans, there’s no better way to celebrate a new year than a hands-on tour of the aquaria, where children can caress horseshoe crabs to their hearts’ content. If that sounds a bit epic for your little one, you don’t have to do the full 20,000 leagues – you can just tell Biomes you’re coming during regular hours with a pint-sized posse and get $1 off each ticket. Finally, for toddlers too small to appreciate the full breadth of undersea ecology, there’s Ruby’s Play Center, an aqua-themed rec room. North Kingstown 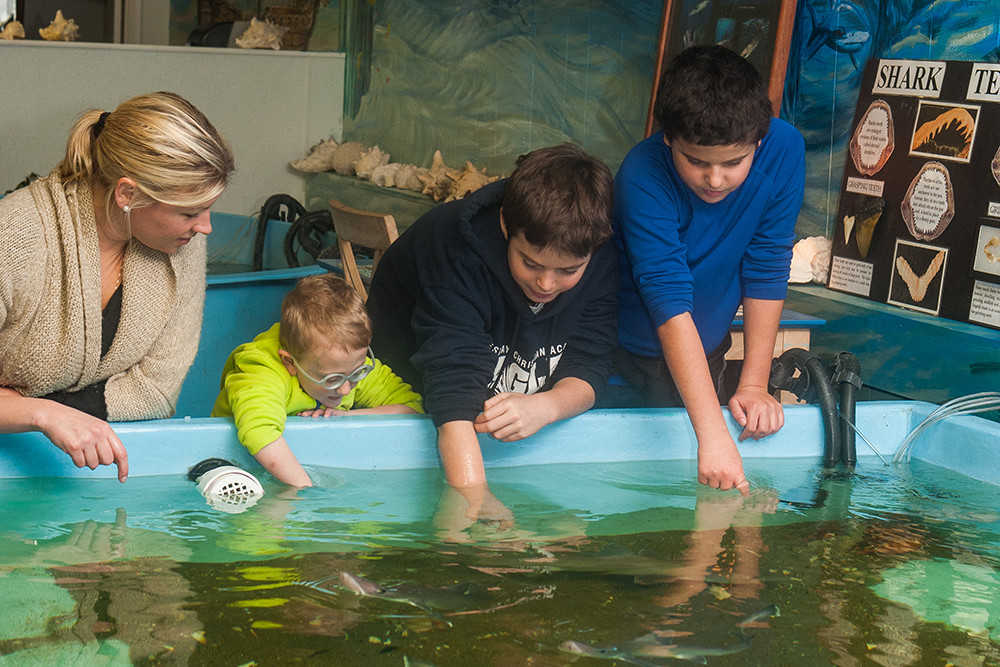 9. Act Out… in a Good Way
When the “theater bug” bites, it bites hard. For 30 years, the Rhode Island Youth Theatre has introduced local children to acting and stagecraft, producing over 200 shows and training more than 12,000 pupils. What began as a summer camp called Fantasy Works Youth Theatre is now a pillar of Rhode Island’s arts education scene: the Youth Theatre hosts after-school programs, improv classes, a summer musical series, and the “Young PlayRIYTs Mentoring Network” for fledgling dramatists. Whether your child wants to belt out the songs of Les Misérables or play prop master for The Outcast of Sherwood Forest, RIYT has set the stage. Saunderstown

10. Do a Little Bit of Everything
See if this is familiar: you walk into your child’s preschool, you see a room overflowing with toys and games, and you think, “Why can’t my kid just hang out here all the time?” Enter KidZone, a large indoor playground with hobby horses, inflatable slides, and everything in between. Kids can migrate from one “play station” to the next, and while some may prefer hurling basketballs and high-octane games of tag, others can embrace stuffed animals or quietly paint at the crafting table. Established by veteran pre-K teacher Heather Wyman Wall, KidZone is a warm indoor space for kids up to seven years old. (Note the new location at Hunts River Commons, 80 Frenchtown Road.) North Kingstown

11. Unleash Your Inner Spider-Man
Climbing walls were originally designed for beefy adults, but preteens and teens are often natural climbers, thanks to their featherweight physiques. And what about toddlers? Once a month, Rock Spot in Peace Dale hosts an intro session for teeny, tiny climbers – because if they’re old enough to walk, they’re old enough to find handholds on a three-foot-tall platform. Other kids’ classes are neatly divided into age groups, such as the Jelly Beans (four to six years old), Stone Runners (six to eight), Super Stone Runners (nine to 12), and Teen Climb (13 and up). With a one-to-four instructor ratio, young alpinists receive close instruction in safe climbing and belay techniques, building their skills from the ground up. Peace Dale

12. Take Flight
Aerial performance is like anti-gravity gymnastics: artists climb long silk sheets, then wrap themselves in the fabric, stretching and posing with the dexterity of contortionists. But most able-bodied people can learn to do aerials, thanks to studios like Arielle Extreme. Seasoned coaches train their protégés in a voluminous gym, and aerial novices levitate above a mat-cushioned floor. All age groups are welcome, and children as young as six have suspended themselves from the Aerial Arts ceiling. Youth classes generally take place in the evenings, but kids can also sign up for private lessons. East Greenwich 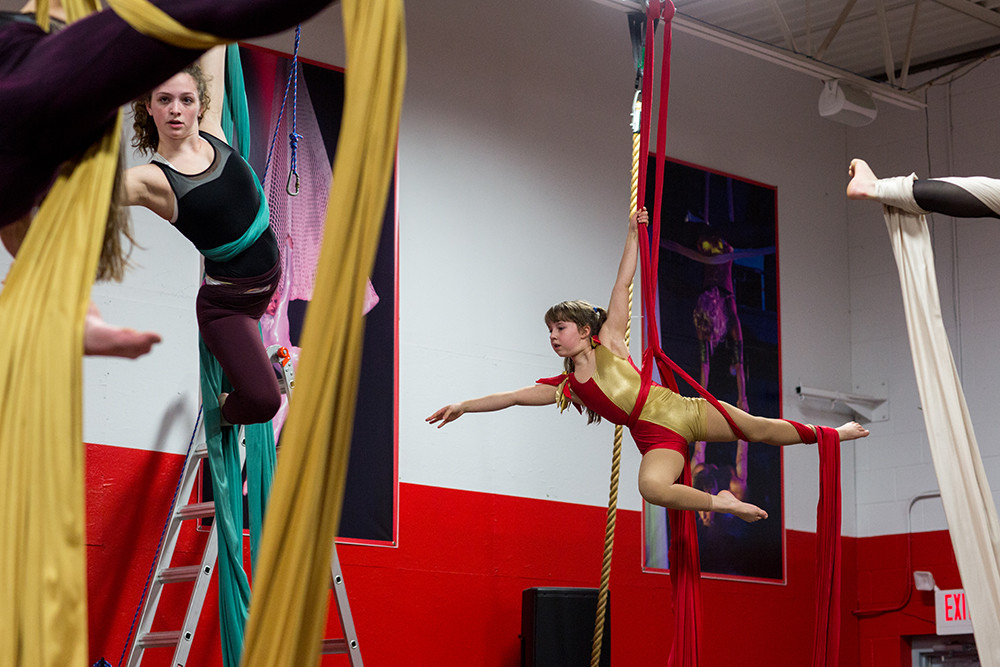 13. Lace Up and Skate
Most winter sports take place during, well, winter. But ice skating is a year-round activity, thanks to the South County Skating School at the Boss Arena. Outfitted with a helmet and a trained instructor, young skaters can learn to glide and twirl during hour-long, eight-week courses. The curriculum is designed for ages four and up, including adults. Kingston

14. Bust Out Gnarly Tricks
Woodland BMX is home to a manicured BMX track, a family-friendly atmosphere, and formal racing events on a USABMX-sanctioned course. The Woodland BMX Parents Org is a registered nonprofit, whose purpose is to coach and equip bicyclists of all ages. Adults are welcome to coast the berms, but the closely monitored track is ideally suited for youngsters with quick reflexes and energy to burn. Not sure where to start? The First 10 Weeks Program is a specially designed clinic for training young riders in the art of BMX. West Greenwich

15. Gaze Into Infinity and Beyond
Every Friday night, visitors arrive at the Frosty Drew Observatory in Ninigret Park, where they take a gander at the cosmos through the facility’s many high-powered telescopes. Far from big-city light pollution, young scientists can browse the millions of astral bodies that speckle a clear sky. During the summer, kids can also enroll in Nature Week, an outdoor bonanza of bird-watching, aquarium-building, flower-pressing, and the launching of miniature rockets, all hosted by the Frosty Drew Nature Center. Charlestown

16. Throw a Hole in One
A “disc” usually costs about $10 at your local sporting goods store – and the rest of disc golf is basically free. Also known as “Frolf,” this game is played exactly like golf, except that the “ball” is a frisbee and the “hole” is a free-standing metal basket with chains. The Ninigret Park Disc Golf Course is South County’s singular place to play, with 18 different holes and plenty of sylvan scenery. This game is an economical mix of strategy and outdoor play, and kids are so focused on winning that they don’t realize they’ve walked more than 5,000 feet! Charlestown