As one of the original thirteen colonies, Rhode Island is rich with history, and our state is dotted with historical places to tour and explore. Discover the people behind the names familiar from highway and street signs (Gilbert Stuart or Coggeshall, anyone) with first names like Experience, Eleazer, and Silas. Surrounded by the turning leaves of fall, visiting and touring these charming homesteads makes for a good reason to unplug and imagine life during simpler times. But let’s not get too crazy – you’ll want to bring along a charged smartphone or camera to capture these vistas
as each location looks like the October page of a New England calendar.

Prior to visiting any of these spots, be sure to browse their websites for details; including accessibility information and hours. While some properties have limited hours and tours or host special events, all offer quintessential views of humble buildings surrounded by pastoral or coastal landscapes, streams, brick walls, and fencing, making for a worthwhile jaunt whether you get to step inside or not. Footwear should be geared toward walking uneven terrain.

Betsey Williams: A Great-Great-Great Granddaughter
If Betsey’s last name sounds familiar, it’s because her great-great-great grandfather is Roger Williams, the forward-thinking theologian who founded Rhode Island. Built by Nathaniel Williams in 1773, this was the family farmhouse where Betsey and her sister Rhoda grew up, later supplementing their income by weaving cloth in pure cottage-industry style. The last Williams to own the home, Betsey bequeathed it, along with 102 acres of surrounding farmland, to the City of Providence, laying the foundation for Roger Williams Park. For nearly thirty years, this brick-red five-room gambrel-roofed cottage was closed due to structural issues but was restored with funding from the Rhode Island Historical Preservation & Heritage Commission and the Rhode Island Foundation's Campaign and reopened to the public in August. Betsey Williams Cottage, 1000 Elmwood Avenue in Roger Williams Park 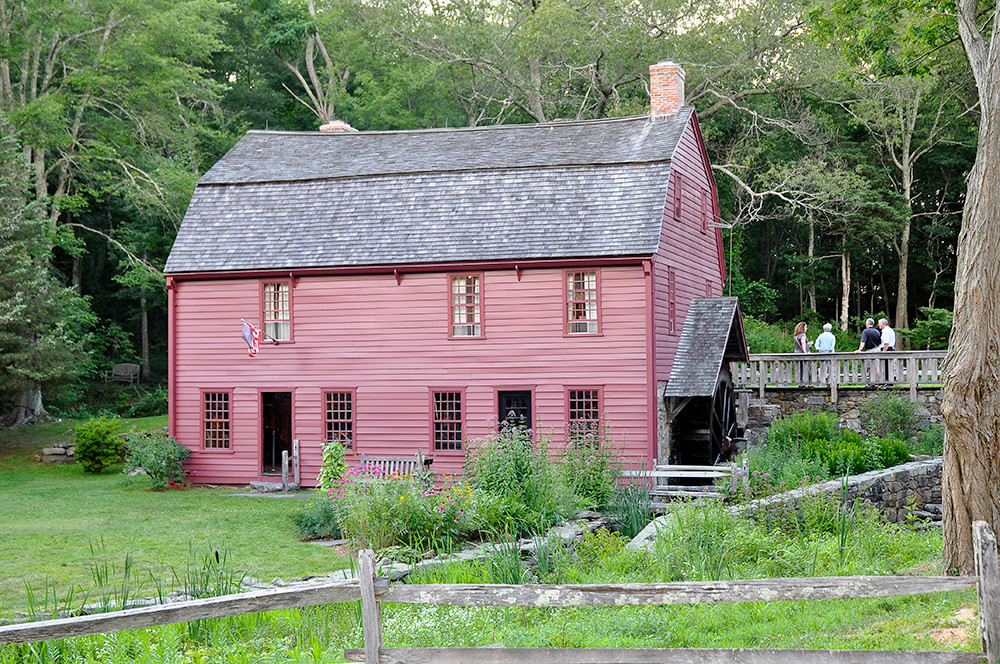 Gilbert Stuart: Presidential Portrait Artist
You know that famous portrait of George Washington that’s not finished? Gilbert Stuart painted – or started – it back in 1796! Known as “The Athenaeum Portrait”, that rendering appeared on the United States one-dollar bill for more than a century and on various postage stamps through the years and is Stuart’s most celebrated work. By the end of his career, Stuart had completed more than one thousand portraits of political and social figures but of course the tale turns sad with him leaving his family in debt and being buried in an unmarked grave. But rewind to the early days by visiting the original house where he was born above his father’s snuff mill and resided until age six. This circa 1750 tranquil stream-side property boasts working water wheels and a colonial herb garden, all on a secluded site. Become a member for boat-rental privileges and enjoy rowing along Carr Pond. Gilbert Stuart Birthplace and Museum, 815 Gilbert Stuart Road, Saunderstown 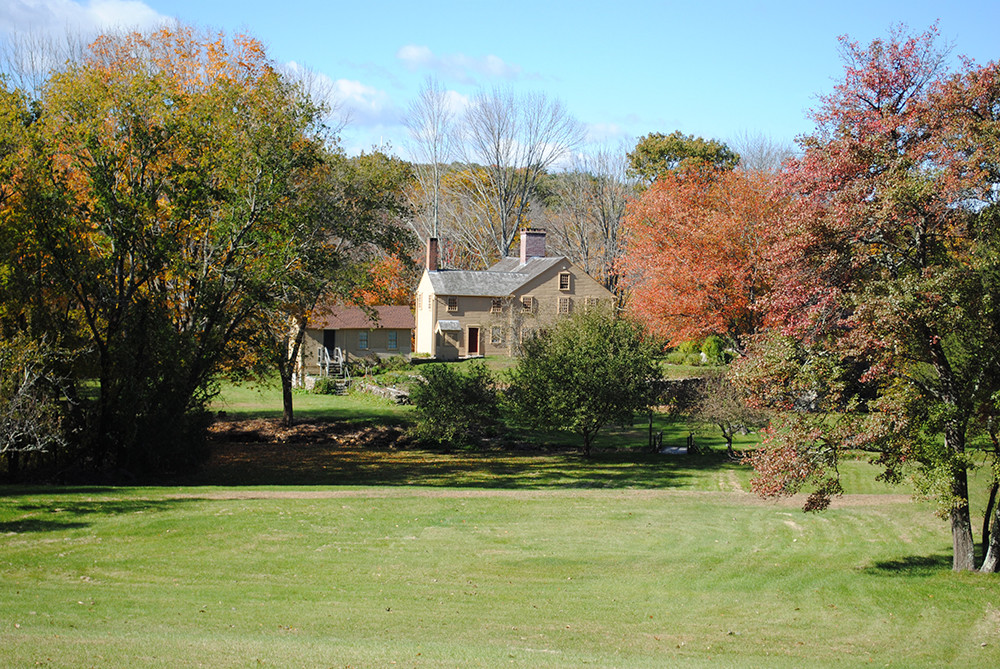 Elisha Smith: Outlandish Lifestyle
John “The Miller” Smith was just that, as well as a map maker and one of Roger Williams’ original band of religious tolerance seekers. Fast-forward to Smith’s grandson Elisha, who was born, came of age, and married Experience Mowry in Providence. Together, the couple moved to “the outlands” now known as Smithfield (named for a London city, not their family) to start a life together. Elisha built a simple, single-room house with a loft in 1696. As time went on and the family grew, additions to the home expanded it to a “country mansion.” Restored and furnished, pay a visit to the buttercup yellow homestead and check out spaces with titles like the buttery, the keeping room, and the smoke room. The rolling acreage also includes outbuildings like the barn (used for seasonal events), a small cemetery, and even a leftover railroad station dating back to 1873, all with an idyllic backdrop of trees and the remaining stone foundations of grist mills. Smith-Appleby House Museum, 220 Stillwater Road, Smithfield 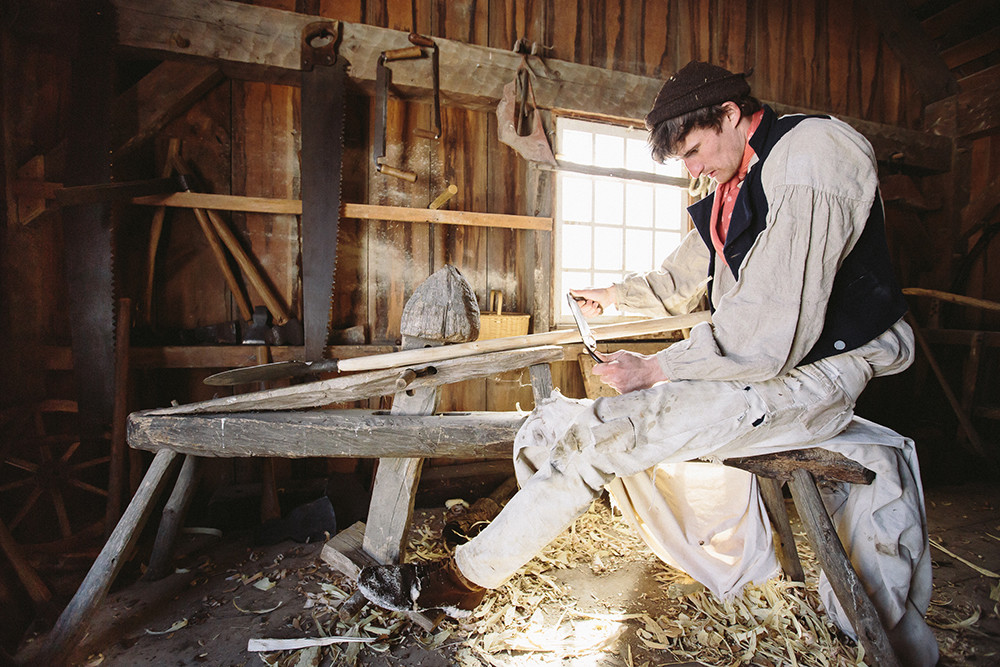 The Coggeshalls: Farmboy Goes to College
In the mid- to late-1700s, Wilbur and Eliza Coggeshall established their eponymous tenant farm on a lush patch of land in Bristol. And yes, there’s a Roger Williams connection: both Wilbur and Eliza are descendants of John Coggeshall, who was part of RW’s original group. Their son Chandler traded his farm tools for state politics and helped found the University of Rhode Island, then known as the State Agricultural School. Two centuries after being built, the Coggeshall Farm Museum was established and continues as a working living history farm. Find heritage and heirloom vegetable gardens, a tool shed/blacksmith shop, hay barn with animals, a garden meadow, and of course, a farmhouse on-site. The museum prides itself on offering a peek of what farm life was like into the eighteenth century with demonstrations in hearth cooking, hand-sewing, and spinning. Coggeshall Farm Museum, 1 Colt Drive, Bristol

The Cape Verdean Museum Gets New Permanent Home in Pawtucket

OP-ED: Brown Deals With Its Past. Now How About The Present?