On his new album, Overwhelmed, a local comic talks about fatherhood, aging and getting weird with candy 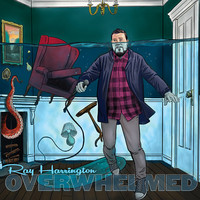 I wasn’t familiar with Rhode Island comic Ray Harrington’s act until I sat down with his new album, Overwhelmed, which is as good a first impression as any. He introduces himself to the crowd in “Boston-adjacent” Somerville as a man made up of “90% flannel, 10% pumpkin spice,” the type of person who would be found in the woods by a jogger at the beginning of a Law & Order episode. This won me over early, but when he later states, correctly, that the Reese’s Peanut Butter Egg is the best candy he’s ever had, it’s clear that Ray’s not just my kind of comic, he’s someone I’d like to have a beer with.

Ray covers a lot of ground across this record’s 16 tracks, from his favorite winter activities (Netflix and seasonal affective disorder) to the absurdity of adults with hamsters to his objection to being called a grammar Nazi despite meeting the criteria. What’s overwhelming are the nightmare gigs, swearing in front of his toddler and the cruel pranks our bodies play on us as we get older. He’s infectiously charming in his delivery, and even when the material gets a little dark or debauched (fair warning, the track “Sex and Candy” has some great spit takes in it), it never feels cynical. There’s plenty of cynicism to go around, so it was nice to get away from it for a bit to spend some time in Ray’s head, even if he’d be the first to admit that that’s a terrifying prospect.

Festival Ballet Providence Gets Students Safely Back to the Barre